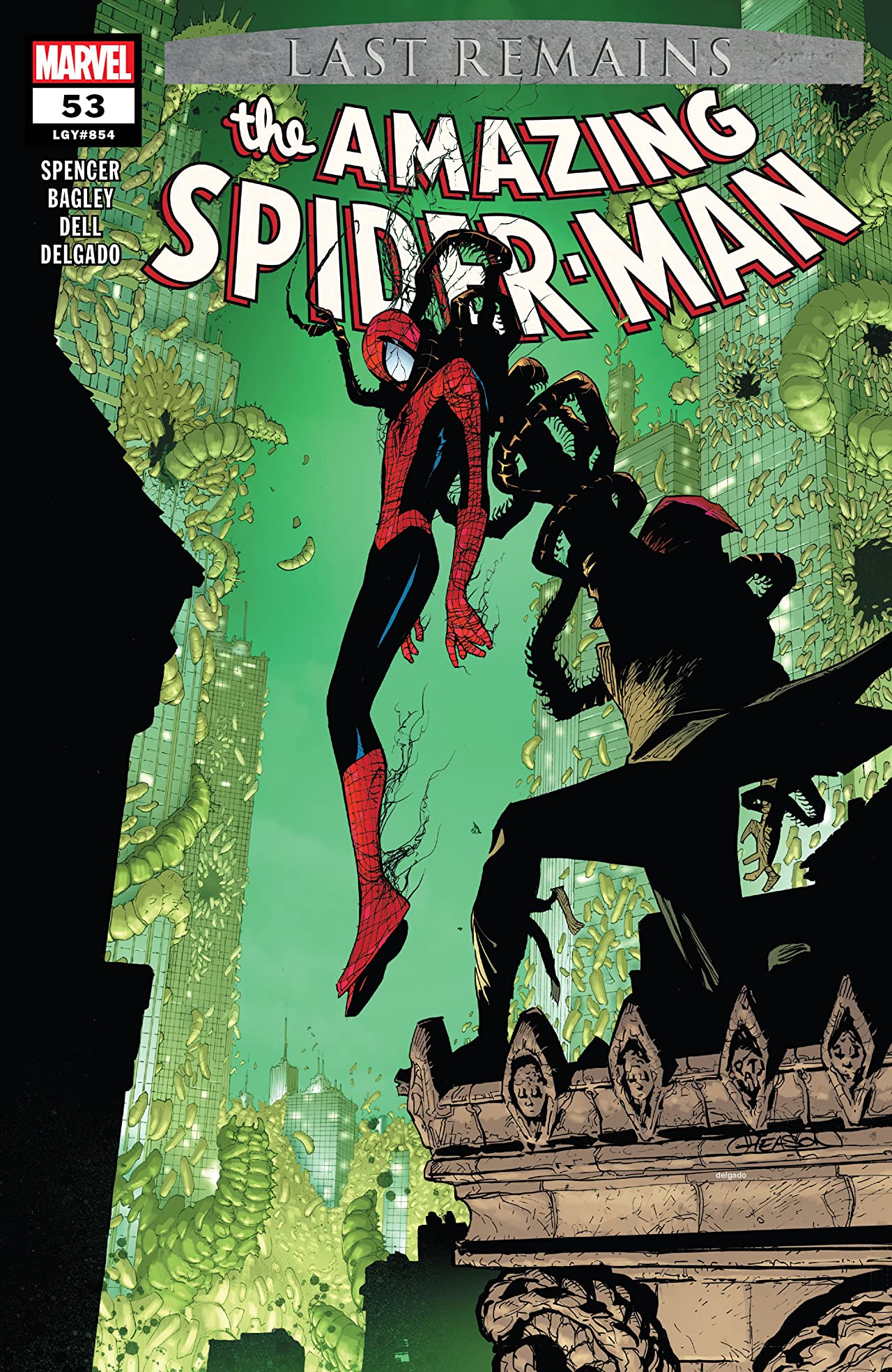 Well, Spider-Man is dead.  So what happens now in Amazing Spider-Man?

We see a blond woman sleeping and then we see Kindred standing over Peter Parker.

Peter wakes up in his old house, the day of “the party” from Amazing Spider-Man #47 (and Deadpool #11).  Specifically, it is a party in honor of Flash Thompson, who will serve in Vietnam.  But there are sinister clues that this is a nightmare—not time travel.   Harry Osborne arrives with Carly Cooper .  Peter begins unsuccessfully chasing after Mary Jane.

We then cut back to Kindred looming over a sleeping Peter and touching his hair.  So is it a dream within a dream?  Kindred walks through the house and returns, with his Maggot-like centipedes seemingly finished putting the Spider-Man costume over Peter (sans mask).

Back in the dream of “the party,” Harry tries to introduce Peter to Lilly Hollister—a stark anachronism.  MJ leaves before Peter can catch up to him and Harry reminds Peter that, at the original party, Peter said, “Speak of the devil and he shall appear.”

Peter wakes up with Kindred looming over him again.  Peter tearfully argues that Kindred can’t be Harry.  Kindred removes his mask to reveal a smiling Harry with his old Gotcha” catchphrase.

This is a very different issue from previous issues in Spencer’s run.  The initial set of stories was based on a fresh start—or a “Back to Basics,” if you will—after Slott’s marathon run.  Spencer has subsequently done  a pretty deep dive, centering issues or arcs around the Gibbon, Gog, and the Sin Eater.  But each time, Spencer filled in the background for the reader as he told the story.

Here, the recap is the reveal, so it would be counterproductive to do that.  If, for instance, the author foreshadowed the “GOTCHA,” it would have felt too predictable.  The result is that issue relies almost entirely on what the reader brings to it.  If reader remembers all of ASM #47, Harry’s Green Goblin run, and his tempestuous relationship with Menace, it’s some clever writing.

Even though the connection between Kindred and Harry is well-written, it feel strange to devote an issue to the big reveal that was already revealed.  This is more like a big confirm.  And a lot of the dread in Kindred falls away once we see old Harry’s face.  First, there was the sense that Kindred was a scary monster-demon, not just another man in a mask.  But score another one for the latex salesmen of the Marvel Universe.  More importantly, Kindred has been defined by ability to instill fear.  By contrast, Harry is almost entirely defined by his fear of Norman.  This reveal makes me feel like Kindred will have to be elevated at least one more time.

One last note, we never learn exactly who that blonde woman in the beginning of the book was.  Was it Spider-Gwen?  Another Gwen Stacey?  Someone else?  It might be obvious to others, but I could have used more context.

Throughout the book, I had trouble telling Harry apart from Norman.  They gave him a much squarer face than usual.  This may have been done because Harry’s unusual chin makes him seem a little less menacing (although with a fright wig and some white makeup . . . .)  But it led to confusion my part.

Grade: B+. I originally marked it as a “B” because I wasn’t that entertained but sometimes you have to give points for cleverness.  Original comment: “It’s a clever book, but to what end?  Peter learns something new, but the reader does not. “