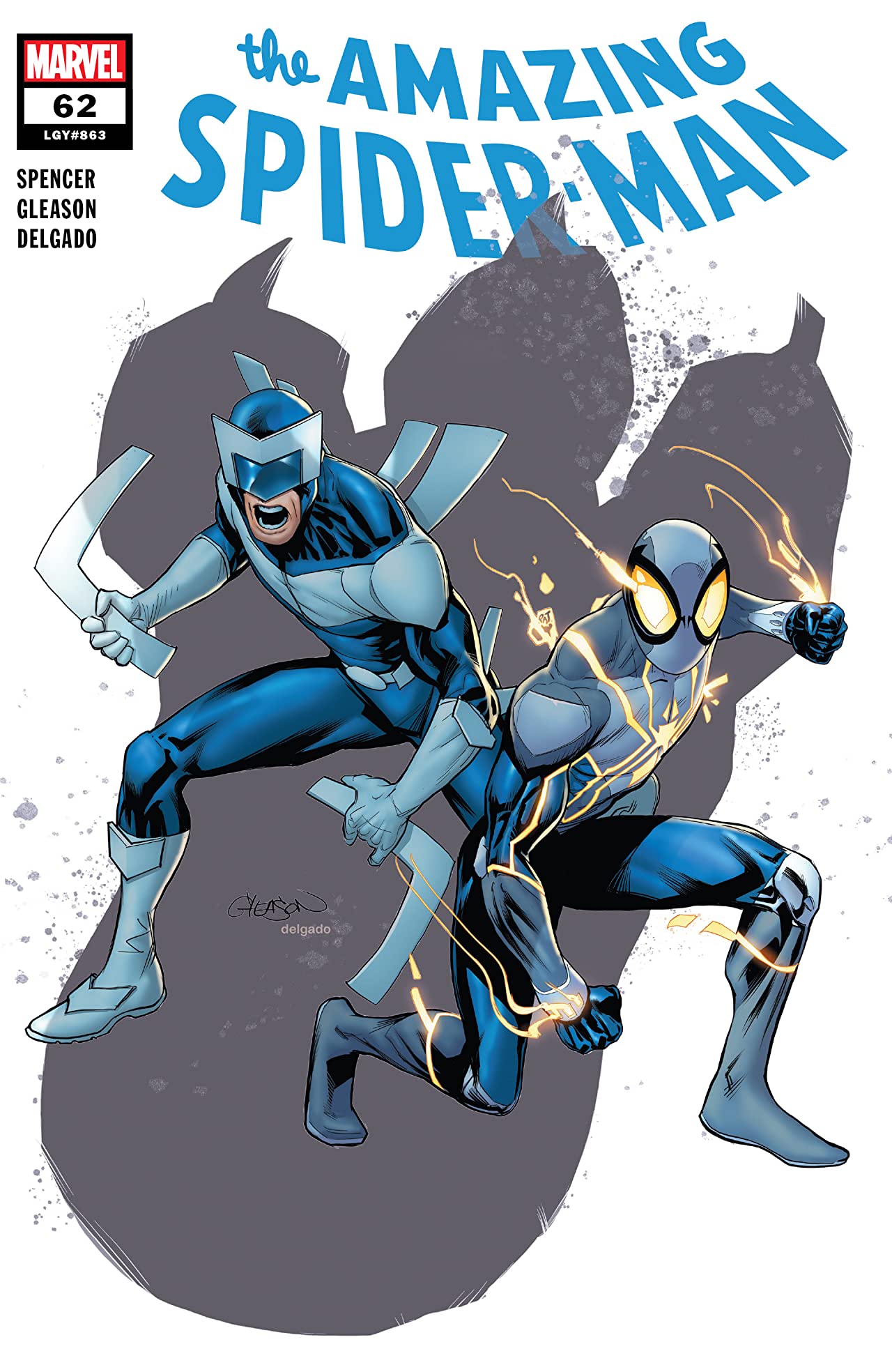 We start on the cover and it turns out Spider-Man’s new suit is not Ricochet colors; it’s Boomerang colors.

Spider-Man is racing to save Gog from a certain death. Bullseye takes the shot and it turns out he was shooting the collar that ensmollens Gog. Gog gets big and starts doing a King Kong routine. Bullseye heaves the collar at Spider-Man who slips it over Gog and shrinks him down. Spider-Man then recalls his love for Gog and crashes into the ground.

We cut to Robbie and Randy eating lunch. Robbie suggests that Randy continue to pursue his relationship with the Beetle because she’s “fiery” (read: abusive, right?) JJJ shows up and talks about a a collaboration between the Daily Bugle and Threats and Menaces. Robbie demurs because he’s got more dignity and JJJ leaves angrily.

Spider-Man and Boomerang leave Gog with Mary Jane until they take care of the Kingpin. Spider-Man tells Boomerang not to flip out, but then Boomerang flips out yelling, “Yes, father, I will become — a BOOMERANG!”

We cut to Kingpin telling Kindred that he’s taking revenge on KIndred for spurning him. Tombstone monologuse to a generic thug about how he’s goign to wipe out Randy Robertson to hurt his roommate, Boomerang.

Glory Grant hands physical pictures of Randy kssing the Beetle in public. Tombstone climbs up to the roof to attack Randy and sees him kissing the Beetle.

This is 50% a Boomerang book and 50% a Robbie Robertson book.

The Boomerang stuff was funny but it’s a little too zany. “Yes, father I shall become a Boomerang” is a great line. But it’s a Deadpool line, a Daffy Duck line, a minor TIck character line. And the Pet Gog situation was resolved so quickly as to indicate that there are no stakes.

The Robbie Robertson part . . . . I kept thinking, “Wouldn’t it be great if Robbie became a real character?” He really exists as a never-wrong voice of conscience. And just about the only other character connections he has are with Tombstone and Randy where he plays disappointed father/older brother again to both just as he did with Jameson. What does Robbie do in his time of? FInd kids in the park and pontificate about their shortcomings as journalists?

Grade: B. Look, that one Boomerang line was really funny. And I have completely unfounded hopes that we’ll one day get a Robbie Robertson ongoing about middle-class life and mentorship. Even though I think much of the Superior Foesing of ASM is not good for the long-term health of the book, it’s a nice little sugar hit.