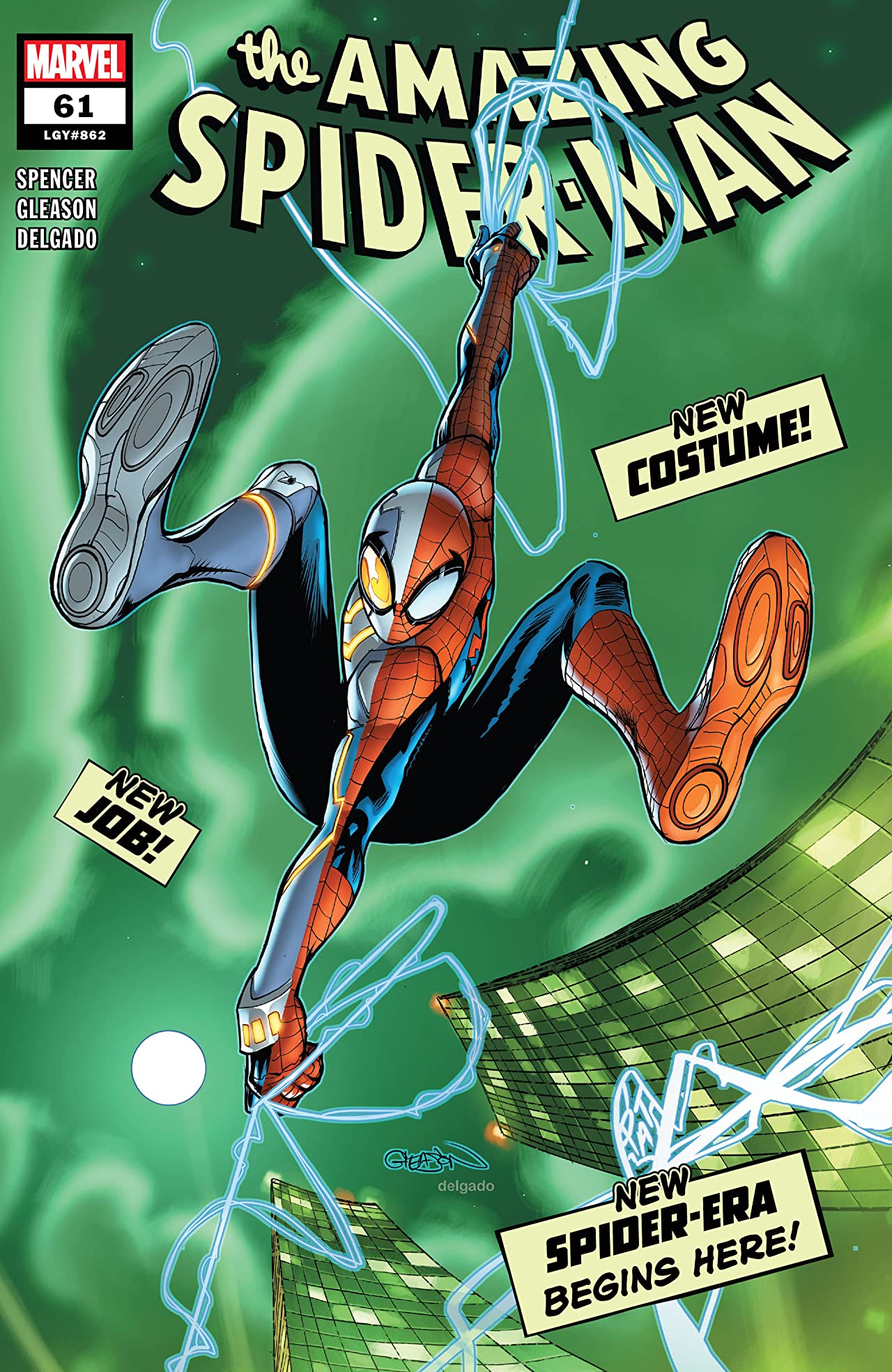 So we start with a close up on <strike>the Joker’s</strike> Kindred’s black-blood stained mouth. And then we get a splash page of Spider-Man disrupting a Shocker/Speed Demon/Hydro Man robbery with a promise that the book won’t be so gritty for the next arc or so.

We cut to a meeting between Kingpin and gang bosses Kingpin asks the bosses to stop or kill Boomerang to which the entire room responds, “I hate that guy.”

Because Peter is out of money he agrees to take a job with Norah Winters. But he doesn’t take a job. Spider-Man does wearing the new suit, which streams Spider-Man live and is JJJ’s idea. There’s also vague talk about improving strength, webshooters, and spider-sense.

We cut back to the bank robbery and see that Spider-Man was not allowed to wrap up the burglary because he has to read one-liners from his fans and even do maneuvers requested by his fans (the web-muck?).

We cut to The Daily Bugle. (Is it called that?) And Robby Robertson plans to investigate Tombstone and his daughter. He then meets his son for lunch.

Kingpin requires the gang bosses to bring Boomerang to him in exchange for an index card that means that police will not harass them. As Spider-Man wraps up the bank robbery, the villains refer to themselves as the “Boomerang Revenge Squad” and admit they were just a distraction. We close with Boomerang—in full costume—sitting on a park bench and Bullseye with Gog in the sights. of his sniper rifle.

Well, and then a letter to the editor from our esteemed founder and host and so forth.

So, first of all, I missed one. Maybe I’ll come back to it. If you’re looking for a take on Amazing Spider-Man 60, take a take (or three) here.

So the Spencer run has this really dramatic split in tone. In part, it attempts to punish Peter through overt horror and misery to expiate the sins of Brand New Day. On the other, it wants to be the continuation of Superior Foes. This issue is basically all Superior Foes as all of the second-tier gang bosses get prepared to try to stop a hapless but comically unstoppable Boomerang.

Kingpin’s challenge to the mob bosses doesn’t make much sense. We ended the last issue with him promising that he would give away more turf to whoever helped him find the Lifeline Tablet. Also, the “Get Out of Jail Free” card appeared to be a literal card featuring Iron Man(?) Anyone with a color copier could make their own. And his description doesn’t make any sense. How would every officer in the City know not to arrest the Owl? There would have to be some kind of agency-wide communication. And once that happened, it would leak because it’s so bizarre and obviously corrupt. So a “secret card” makes no sense. Also, a criminal with no accountability would embarrass Fisk and hurt his re-election chances. This is something Kingpin would have to do in a public-facing way.

That new costume? Isn’t it the just the Big Time costume with about 20% more Ricochet? The difference is that those costumes did things for Spider-Man. This one allows users to experience being Spider-Man in VR, which sounds clever for a moment, but that’s basically just motion-sickness central.

Here, by contrast, it’s obviously a trap. So I have to keep waiting for it to stream Peter’s secret identity and lock up in battle. Any minute now. At one point, Spider-Man admits that his new schtick is a lot like Screwball. Glad the writers admitted it because I was thinking the same thing. Screwball’s deal was to get more views. How can Spider-Man stand to be so obnoxious when he’s serious about his work? What if someone died because he was watching his phone? That feels very out of character.

I never quite understand why Hydro Man and Speed Demon aren’t much, much more powerful.

Spencer is really good at mining modern-day foibles for plotlines. For instance, the app wars in Ant-Man. Here, the idea that Gog is a pet influencer and Spider-Man as a Twtich streamer are good examples of that.

Grade: B.- If instead of being one book, this book should split into two books: The Tightening Web of Kindred and The Breezy Broheme Boomerang. The two stories feel pretty different. They have a different logic. And the appearance of one is to the direct determent of the other. It slows down. Plus, this issue was almost all set up. But maybe what’s next will be good.