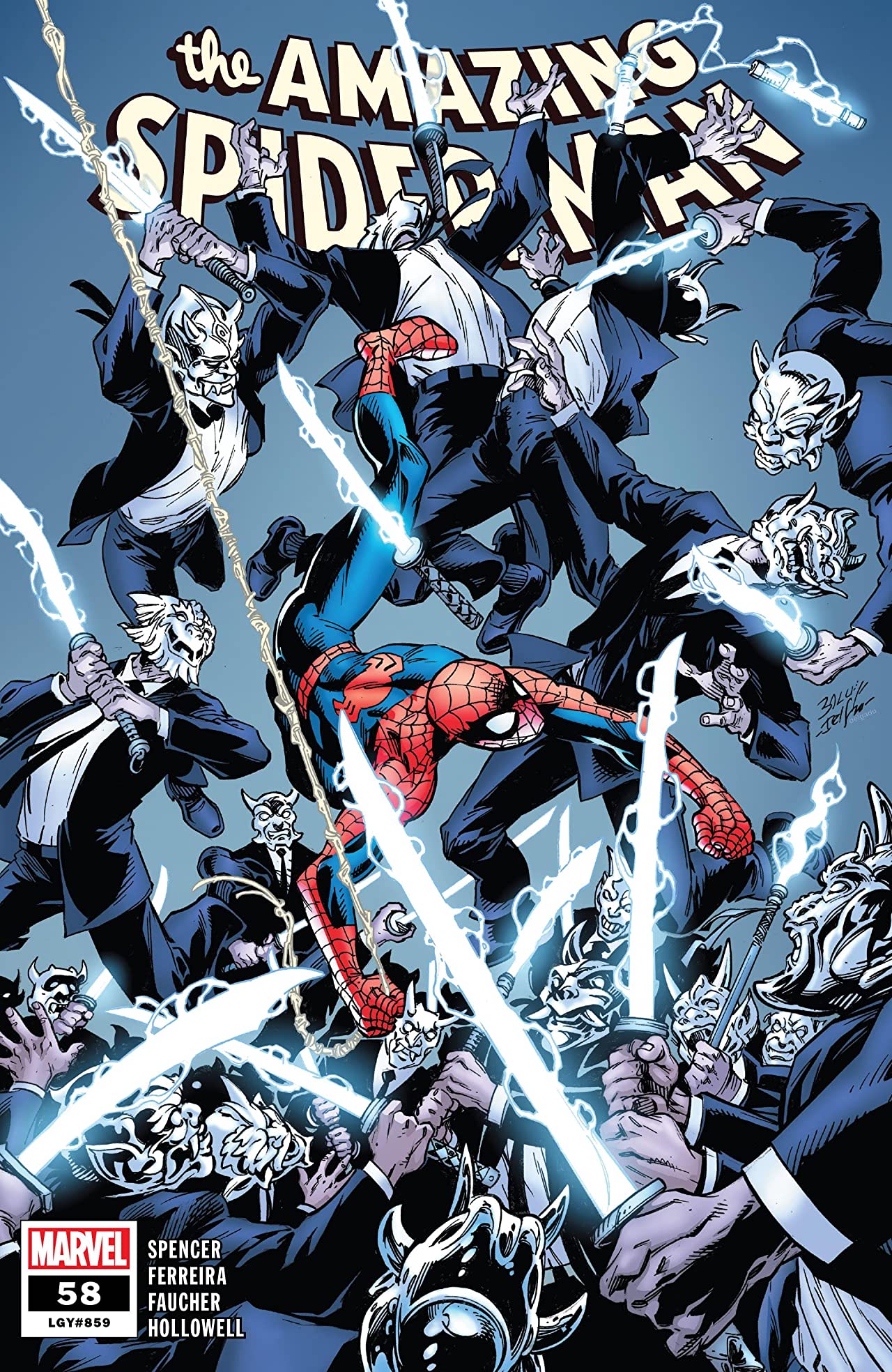 We open with Spider-Man remembering his fight with Kindred and bemoaning some sins. Then we see he’s fighting a horde of Mr. Negative lackeys/”demons” with glowy swords.

We then cut back to Martin Li explaining that Mr. Negative was a dominant figure in his psyche, that Sin Eater freed him, and that now Mr. Negative is trying to take control back. Li has been blacking out and Mr. Negative planned for his demons to attack him.

He then explains that he overheard Kindred telling Kingpin that an organized crime family would attack Aunt May at the F.E.A.S.T. Center.

Li explains that Mr. Negative is “here” but cannot enter the “holy” F.E.A.S.T. Center. We see a big red demon flying outside the building. This is confusing because earlier we saw that big red demon enter Li’s body. And also Mr. Negative has already awoken.

Mr. Negative’s demons then attack. Just as they have May and Martin Li surrounded, Spider-Man arrives and we cut back to the fight that opened the issue. We then cut back to the Kingpin reminding Kindred of how he begged for a favor and Kindred said, “No.” A Mr. Negative demon promises Kingpin that Mr. Negative will provide “the answer to all your most earnest prayers.”

Peter wakes up with Kindred looming over him again.  Peter tearfully argues that Kindred can’t be Harry.  Kindred removes his mask to reveal a smiling Harry with his old Gotcha” catchphrase.

Look. It’s Liz. Liz is the villain. Liz harbored a fugitive Norman. Liz is the CEO of Alchemax. Harry went crazy when he was reconciling with LIz. During the in the Mike Costa Venom run, she was obviously manipulating everyone. She is playing so dumb in this issue that it’s inconceivable that she is really this dumb.

So, I think I have to be Mr. Negative here, but I never saw Mr. Negative as a real threat. He has that spooky contagion vibe. And he has that weird relationship with May.

But generally when you have a villain who commands an army, each individual soldier in that army becomes disposable. I don’t buy that these demons are really going to hurt Spider-Man. And I certainly don’t believe anything bad is going to happen to Aunt May where we are in the story. And I also don’t believe that Mr. Negative can do whatever it is Fisk wants. (They’re being very coy as to whether it’s bringing back Vanessa again.)

It’s possible that this is because I did not read all of the original stories. But he’s just, like, Two-Face Plus, right?

I’m not sure I’d be opposed to a Mr. Negative arc in general, but I find it hard to believe that he’s going to be a big part of the big story with the big boys.

One gratuitous note: The past few issues have included the same memorial note to Marvel Comics Publisher Mike Hobson. The memorial does a good job of explaining that he was a swell colleague. But it does a bad job of explaining what Mr. Hobson did with respect to the production of the comics. And it includes covers from Secret Wars (I) and Age of Apocalypse with no explanation. I wish the memorial included some explanation about Mr. Hobson’s role.

Grade: B. It’s fine. A fine beginning of a Spider-Man arc. I just think that Mr. Negative has the same level of threat as the Rose when it’s clear that we’re supposed to be thinking that there is a real player on the stage, someone to jockey with Kingpin, the Green Goblin, and Kindred.