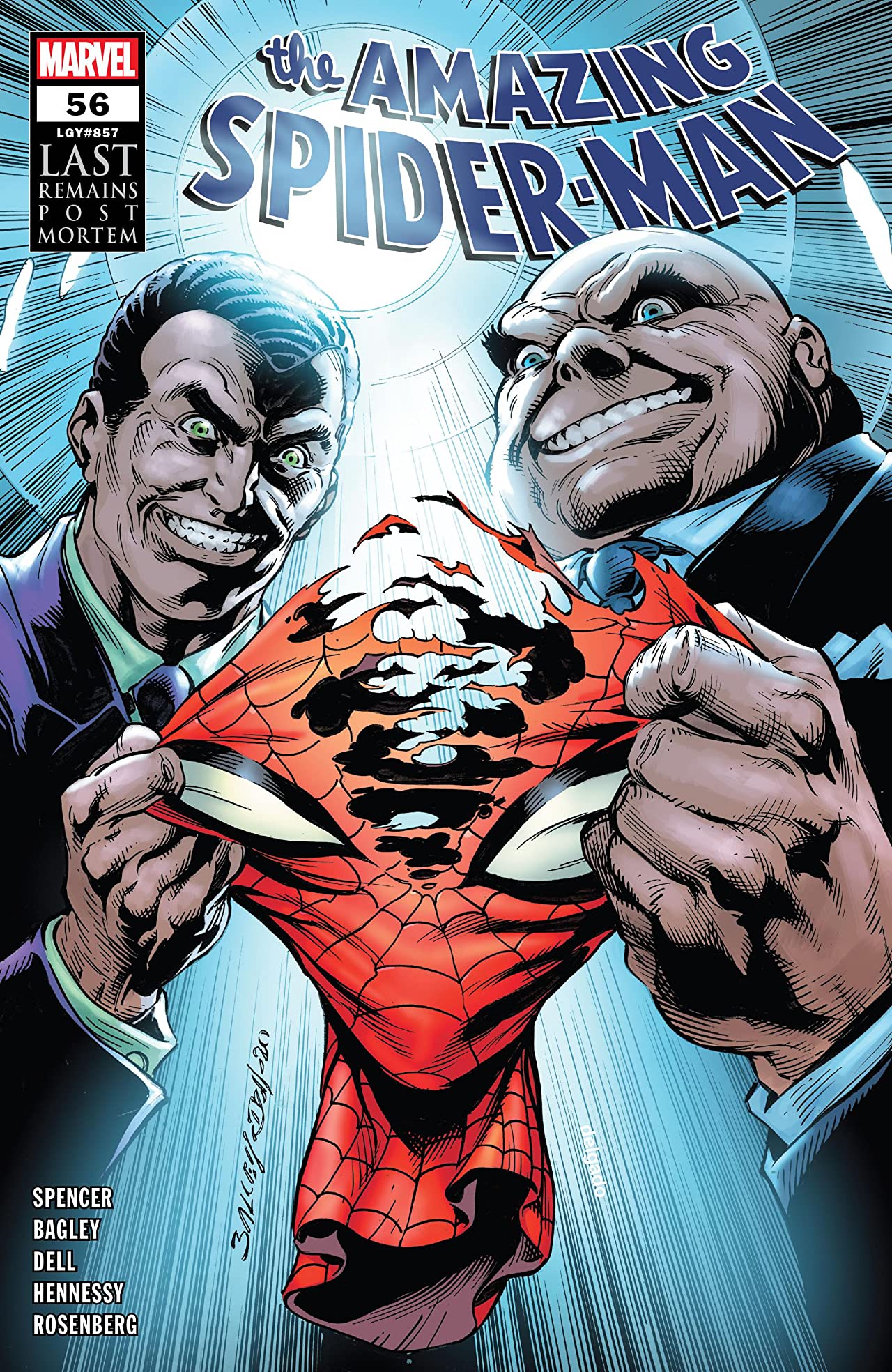 “[T]his feels like a season premiere of a good television show.”

We start with a flashback in which Norman Osborn agrees to help Mayor Fisk capture Kindred and Mayor Fisk admits to dabbling in the Darkforce Dimension. We then flash somewhat forward to see that Fisk has rigged the Spot to imprison Kindred in a darkforce cube (well, rectangular prism).

We finally arrive at the present in a futuristic room at Ravencroft where technicians explain that the cube is holding Kindred prisoner, but that Kindred can talk, but further that Kindred refuses to talk. Kingpin arrives and threatens to torture Kindred. Osborn intercedes, arguing that he could break Kindred’s spirit more effectively.

Osborn clears the room, at which point he confesses to the reader (and also Harry) that he hopes to give Harry a second chance not to be a tormented demon like Norman.

We then flash back again to the Dinner with Kindred where we see that MJ knew about Norman’s plan to attack Kindred and that she escaped with the Order of the Web.

In the present, Norman continues pleading with Harry, arguing that there was some purpose to Norman’s sins leaving him permanently even though they returned to the other villains.

We cut away to Speed Demon telling Carlie Cooper that he recovered after this sins “came back with a vengeance.” He asks her to dinner as repayment for caring for him while he was debilitated. She agrees to a coffee date as his car hurtles through the City.

We then cut back to feast where May tries to instigate and chaperone a brunch date between Randy Robertson and the Beetle while Randy hints at the Beetle’s anti-social personality. May opens the door to find a pleading Martin Li scared of an unknown “he.”

After we return to Norman, Norman recalls Kindred’s long speech just before being captured. Kindred told Peter and Norman about “the truth” and “what you did” and “the truth” again.

In the first Spider-Man comic of every year, the carrion virus claims another parallel Earth. “New Year, New U.” Sorry, I felt like I had to get that out of my system. (So that I didn’t become a Carrion.)

Writ large, this feels like a season premiere of a good television show—not just the beginning of a fun, little four issue arc. This book does more than say “this is the macguffin or the villain” up next, it wraps up the last arc lets us know where the main story is going, but also takes real pains to move forward the B, C, D, and E stories. Spencer is spinning all the plates at the same time.

In the abstract, I would be disappointed. We had the Green Goblin, Spider-Man, and Kindred all in a room with Mary Jane and six other spider folks. Kindred had explained he was going to reveal this explosive truth. It felt like we finally got to the top of the roller-coaster hill after years of clickety-clack climbing. And then we used the Spot to put it all in a dirty ice cube tray.

But this issue makes it feel like there’s a larger plan. And if Spencer wants to delay the pay off because he thinks can up the ante, then I am interested to see if he can pull of the trick.

This is especially true because it seems like Spencer’s game is dangerous. This mysterious “the truth” seems like it could be one of two things. It could be Harry being delusional about a slight that never happened—say Peter mistreating Norman or Mary Jane rejecting him. In that case, the reader might feel like he was dragged through years of stories about a bad-faith mistake. Or “”the truth” could be that Peter genuinely did something wrong (often hinted as the deal with the “devil” in One More Day). But I think most readers do not want swing with a morally compromised Spider-Man (as opposed to his normal moral anguish).

(1) The alliance between the Kingpin and Osborn and Kingpin’s use of quasi-mystical technology both feel somewhat out of place for the Kingpin. The Kingpin is in complete control of a very narrowly defined domain. Sure, he seems to keep running into magical items during events. And, yes, I guess he was the lord of a clan of mystical zombie ninjas. But there’s a reason that the character seems comfortable hiring Bullseye over and over again rather than (say) the Living Laser or the Crimson Dynamo. And it’s hard to imagine him in the same room with a Kraven or a Doc Ock.

(2) This entire story seems to require a better explanation of what the Sin Eater doing when he was shooting people. Was he really extracting “sins?” And why were the sins always related to powers? And when they returned, did they really come back with “a vengeance?” That is, are Morlun and the Juggernaut more powerful than ever? Or was the process different for Speed Demon than for others? And why? And why did removing the sins and the powers make Nefaria docile, but Norman still seems to have a daring plan to rescue Harry with explosives and an alliance with the criminal mayor?

This whole thing has been making me think about Axis and how and it quickly became clear that “inverting” characters was hardly different from replacing them entirely. If you flip too many of a character’s attributes, little remains. That’s sort of the problem with this Norman. I might be wrong, but I don’t think Norman was ever such a sweetheart. And even if he were at one point, his years of schemes and frustration would make him unlikely to mellow. Even when the Goblin Serum has been inoperative, he’s still been a controlling, over-competitive, uncaring person. And that’s when he’s trying to help. Put simply, this “Nice Norman” is not merely Norman without the insanity; he’s Norman without the Norman.

(3) Finally, Norman tells Harry that they can finally spend time together with Harry’s son. If Norman were really interested in doing something about that, perhaps he should check in on his grandson who is in the middle of dealing with symbiotes and codices and all of that? This is not something that should escape Norman’s notice, having recently been on the spine-ripping side of things.

I wrote about these at length, but it’s no fatal flaw that a comicbook raises demogoblins of little minds. There’s always going to be some kibble sticking out when you go for breadth.

Grade: B+. Although we take several steps away from resolution, I like this issue on structural grounds.